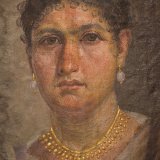 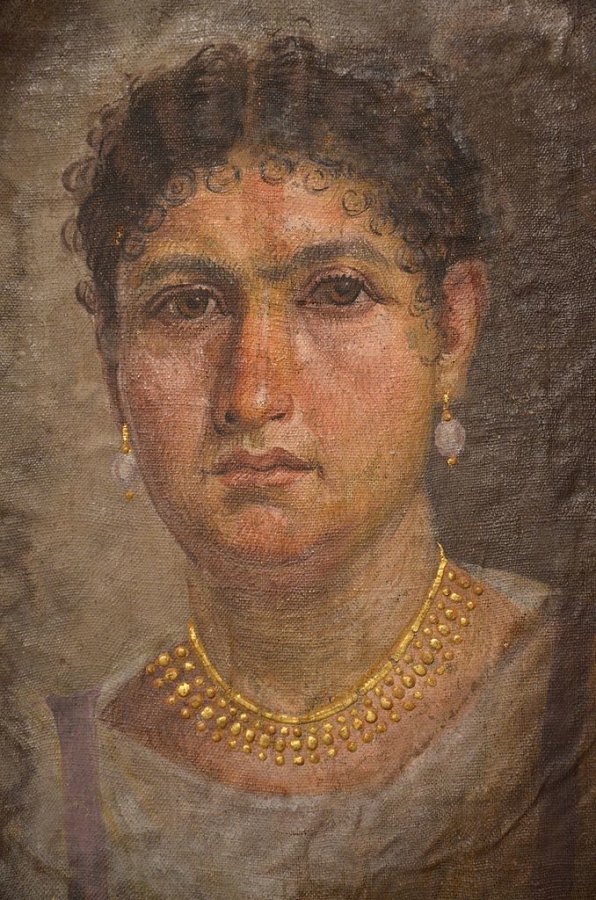 This mummy portrait of a first century AD Egyptian lady known as Aline is captivating for a number of reasons. Most striking, perhaps, is the convincing realism of such an ancient work. We're used to much more stylised depictions of people from this era, but here we have a portrait which looks like a real person, and evidently was a real person, because this was painted directly onto the linen wrapping of the mummy. It can be dated fairly precisely to 24 AD because of an inscription in the tomb and Lady Aline's hairstyle. It was probably painted by a Greek artist using egg tempera, and the brushwork is very typical of tempera painting. The paint is quick-drying so it isn't easy to blend it on the canvas to make smooth transitions from light to dark. Instead these are done with a lot of tiny brush strokes, which you can see in the shadows around the nose, eyes and cheeks. Also characteristic of egg tempera is the clarity of the colours in this 2000 year old work, and its extraordinary state of preservation. Egg tempera is ph neutral (unlike oil paint), and acts as an effective preservative to both pigment and support, whether it be linen, cotton canvas or wooden panel. As a painter working in the 21st century with the same materials and similar techniques I'm deeply moved by this haunting 1st century portrait which is so clear and rich and looks like it could have been painted yesterday.